Rats and mice are very destructive and contaminate buildings. Rats and mice urinate often, creating stains and offensive odors. A single rodent will produce about 25,000 feces droppings in a year.  They also do damage to electrical wiring by chewing off the insulation. It is estimated that 25% of fires, of an unknown origin, are caused by rats. 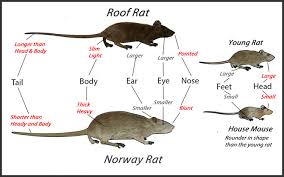 They transmit many diseases, including: Murine typhus fever, rat bite fever, salmonellas or bacterial food poisoning, viral diseases such as foot-and-mouth disease, and many other diseases.  Norway rats can also carry the rabies virus.   Fleas from infected rats can also transmit the plague.  Rodent feces are the cause for the fatal Hantavirus.  The Hantavirus has been found locally in mice droppings. Rats memorize their environment by body and muscle movement alone.

When objects are removed from their territory, rats will continue to move around them as if the objects where still there.  They are highly suspicious of new items in their environment. This is important to know when treating for rodent infestations. Successful control depends on proper identification of the different species. Norway and roof rats differ in size, habits, food preferences and regions.

Rats and mice constantly leave droppings. Fresh droppings are dark in color and soft in texture, but after three days they harden and lose the dark color. Rats always travel the same runways and leave “smudge marks”, a buildup of dirt and oil from their fur; along walls, pipes, gnawed openings, beams, and rafters.

In some cities, the sewer rat population outnumbers the people population. In Australia, one farmer recorded 28,000 dead mice on his porch after one night’s effort to poison them and 70,000 in a wheat field in one afternoon.

If you are looking for a pest control company in Pakistan, you have come to the right place. Our reliable pest control services and professional Staff are technical and trained. Our expert technicians venture to get to the core of the problem and eradicate it once and for all. Progress has to be monitored. So needless to say, once you appoint us to take care of the problem we will make sure we see the end of it. Our services target all kinds of pests. Perfect Pest Control has been serving residential and commercial customers since Last few Years, as well as in Karachi and All over the Pakistan.